KEY TRENDS IN THE COPPER MARKET

2016: the prices surged in the second half of the year driven by the strong demand from China, the Trump factor, and supply disruptions.

Outlook: neutral. At spot price, over 90% of the total capacities are profitable. The market will remain balanced going forward, with supply disruptions and stronger demand from China acting as potential positive price drivers.

Early in 2016, copper prices kept declining, In mid-January hitting the seven-year low of USD 4,310 per tonne by mid-January. From February, though, the market started to recover buoyed by the optimism on the back of stimulating measures in China and production cuts in Chile. The market responded positively to the election of Donald Trump as the new US President on 9 November taking in his promises to boost investment in the US infrastructure. As a result, copper quotes surged to a year high of USD 5,936 per tonne by the end of November, with the average copper price for the full year standing at USD 4,863 per tonne, down 12% y-o-y.

In 2016, the refined copper market was slightly oversupplied. The surplus was below 1% of the total market volume, or 170 kt, up 120 kt as compared to 2015. During the year, total exchange warehouse stocks went up from 483 kt to 548 kt (or from 8 to 9 days of consumption), with off-exchange inventories showing a moderate increase.

No.12 Nornickel is the world’s twelfth largest producer of copper

Drivers of the copper price in 2016

China remains the key copper consumer, with its market share reaching 48% in 2016 due to the demand growth of 4%. Market concerns about China’s sharp economic slowdown did not materialise. China took advantage of low prices to significantly boost imports of copper and, in particular, copper feedstock. In 2016, refined copper imports grew by 3% to 4.9 mln t, while copper concentrate imports went up by as much as 28% to 17 mln t. This enabled China to meet its growing consumption needs through the local production ramp-up. The demand for copper in developed economies saw only a slight increase in 2016, with Europe (the Company’s key market for copper cathodes) by 1.4%, North America by 0.3%, and Asia (excluding China) by 0.8%. Russian domestic copper cathode consumption in 2016 remained flat y-o-y. 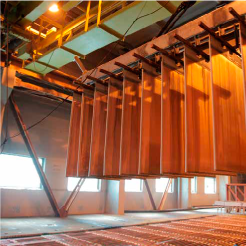 In 2016, global production of refined copper increased by 2.5% (or 0.55 mln t) compared to 2015 and totalled 22.5 mln t. China remains the key driver behind that growth, with the national government firmly committed to the expansion of domestic smelting and refining capacities, which, according to the Chinese experts, increased in 2016 by 0.4 mln t and 0.3 mln t to 6.5 mln t and 10.8 mln t, respectively. In 2016, refined copper production in China grew by 12% to 7.9 mln t, while its share in global output was 34%. Only one quarter of Chinese production is local extraction, with three quarters coming from imported copper concentrates and scrap. In the rest of Asia (excluding China) production growth was 7% (with Japan, Indonesia and the Philippines as the key contributors), while in North America it stood at 6% (up in the USA and Mexico and down in Canada).

In Europe and South America production went down by 1.7% and 1.5%, respectively, whereas in Africa the 10% decrease was due to reduced production in the Democratic Republic of Congo and Zambia. According to the preliminary estimates, Russia saw its production decline by 2% in 2016, to a certain extent due to the shortage of copper scrap used as a key feedstock by producers in the Urals.

In 2016, global copper mine production increased by 3.8% to 19.9 mln t. Additionally, approximately 2.6 mln t of refined copper (down 6% y-o-y amid low feedstock prices) was produced from scrap and concentrate stockpiles.

This production surge was mainly attributable to the explosive growth in Peru, the second largest copper producer after Chile, whose annual output spiked by 40%. The new Las Bambas mine acquired by the Chinese MMG from Glencore kicked off commercial production, which amounted to 0.28 mln t of copper in metal equivalent. Another major project was the doubling of copper production capacity at Freeport-McMoRan Inc.’s Cerro Verde mine in Peru to 0.5 mtpa.

Indonesia stepped up its output by 26% as a result of expansion at Grasberg mine run by Freeport-McMoRan Inc., while the permit for copper concentrate exports granted in 2H 2016 enabled the company to ship the entire output to overseas markets.

Mexico saw its production grow by 28% owing to the development of Buenavista, Southern Copper’s major mine, which boosted copper output by 160 kt. Production in the USA increased by 4% as a result of the Bingham Canyon recovery and expansion at Morenci mine. In Kazakhstan, commissioning of the new Bozshakol mine by KAZ Minerals drove the output by 11%.

Production in Chile, the world’s leading copper supplier, fell by 3% in 2016 on the back of an expected 15% decline at BHP Billiton’s Escondida, the world’s largest copper mine delivering lower copper grade heaps, along with a 3% decline registered by the state-owned Codelco that failed to raise sufficient financing to maintain production at its oldest mines.

African production was down 5%, as, in late 2015, amid declining copper prices, Glencore announced an 18-month suspension of operations at its Katanga mine in the Democratic Republic of Congo and Mopani mine in Zambia to launch upgrade works. In Australia, copper output shrank by 5% following a widespread power outage that occurred as a result of storm damage.

While in the previous years the actual copper production growth was below the analyst expectations due to strikes, accidents, delays in the commissioning of new facilities, engineering and occasionally political issues, the reporting year saw way fewer emergencies and disruptions, with production exceeding the estimates by 0.5 mln t. However, an increase in concentrate production was offset by the relative shortage of copper scrap amid low market prices, which brought the refined copper output for the full year in line with January’s analyst estimates. At the same time, consumption growth was slightly above the expectations, causing the surplus estimates to be revised down by 0.1 mln t.